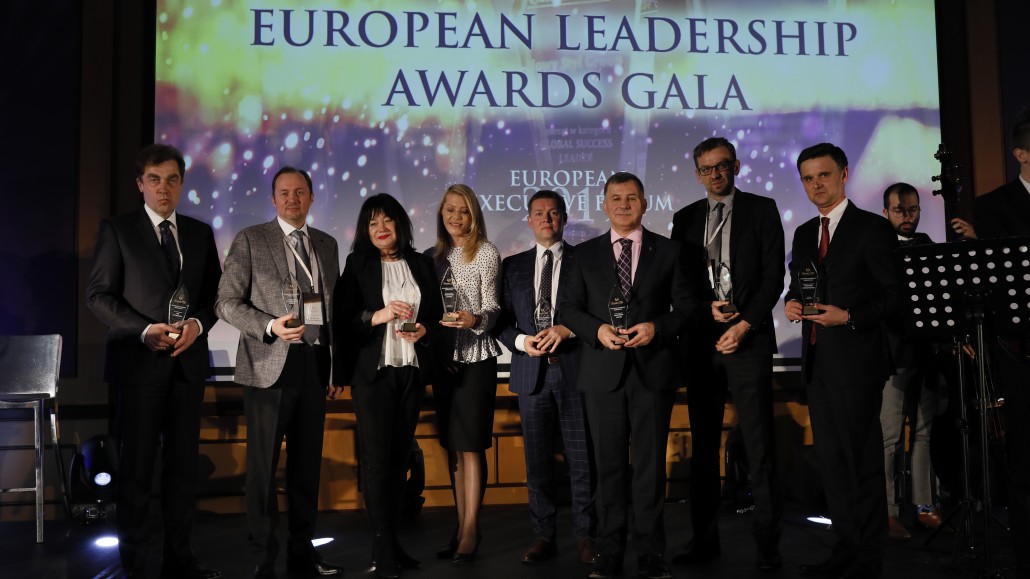 The 7th edition of European Executive Forum was held on April 4 at the Sheraton Warsaw Hotel. During the several hours of intense discussions, we had the opportunity to learn about the challenges faced by modern companies and get to know the winners of “European Leadership Awards”.

The Guest of Honor of the conference was Jerzy Kwieciński, Minister of Investment and Development, whose opening speech focused on the growing employment rate in Poland, decreasing level of debt, and record low budget deficit. The Minister also pointed to the rapidly developing innovation sector in Poland. In his speech he emphasized the high level of funding for research and development as well as the growing number of startups emerging in Poland, which is currently the highest in the world.

How to win in the era of AI, robotization, and automation? This question was the theme of the first panel discussion, which was led by prof. Jarosław Arabas, Director of the Institute of Computer Science, Faculty of Electronics and Information Technology of the Warsaw University of Technology. The panelists included: Michał Góra – President of the Management Board, Alfavox; Artur Pollak – President of the Management Board, APA Group; Prof. Krzysztof Obłój – Professor of strategic and international management, Kozminski University; Mariusz Sudoł – Operations Director CEE, Hitachi Europe Limited, and Dr Paweł Urbański – Director of the Warsaw University of Technology Business School. The panelists first focused on the effectiveness of artificial intelligence. According to Adam Góra, before the implementation of AI in a company it is advisable to perform thorough analyses to make sure that the investment will be beneficial. Another topic discussed was the areas in which the application of AI should be most extensive. The speakers agreed that the areas that would benefit most from the implementation of AI are progressive robotization, companies from the financial industry, and the production of autonomous cars. The discussion also included the topic of machines taking over more and more responsibilities of physical workers. The first debate was summarized with a statement that artificial intelligence is just a technology, and it is up to us to decide how it should be used.

Next on the agenda was a speech of a Special Guest – Nicolas Colin, Co-founder and Director of The Family. The speaker started with a brief introduction presenting a historical outline of previous technological revolutions. According to Nicolas Colin, we are now in the fifth revolution, which includes the development of digitization and digitalization. According to the futurist, the development of new technologies has a great impact on enterprises and the economy and resulted in the creation of digital economy. The speaker stated that in this type of economy more power is located outside of enterprises, as they are created primarily by users. One example is Facebook, which currently has over 2 billion users who decide what they do and do not like and whether they still want to use its services. A lot depends on customer experience, which should be developed at all levels of business operations (not only in the service department). Another interesting example of meeting the expectations of customers is Netflix, which was the first platform to release entire seasons instead of forcing the audience to wait for each episode in a series. Currently, enterprises from the area of digital economy also have a big advantage over the industry, because they do not require initial investments in expensive durable goods, such as airplanes. The very large accumulated capital in the form of savings around the world and the ubiquitous globalization (over 8 billion mobile phones in the world) provide excellent conditions for the development of Internet enterprises. Nicolas Colin said that we live in a time when corporations compete with one another not with assets or access to information, but with entrepreneurship – the ability to create quality goods on an adequate scale.

The moderator of the second discussion panel was prof. Witold Bielecki, Rector of the Kozminski University, who invited the following panelists to the discussion: Jarosław Broda – Vice President of the Management Board for Asset Management and Development, TAURON Polska Energia SA; Nicolas Colin – Co-founder and Director of The Family; Michał Kurzelewski – Director for Medical Affairs, Pfizer Polska; Sylwia Toczyska – Director Client Services, Vistra Poland, and prof. Cezary Wójcik – Founder and Director of the Center for Leadership. The panelists began the discussion from innovation in practice. They discussed the story of the iPod, which was initially designed by Sony. This brand, however, was already producing Walkmans and CD players and was mainly focused on their improvement. Therefore, it decided not to mass-produce the new player. According to the panelists, this resulted from the fear of the innovative solution, which was treated as a threat to the popularity of existing devices. The idea was taken over by Apple, which focused on the production of the new device. Sony lacked a clear strategy, leadership, and answer to the question: if a given organization does not implement an innovation, will it still be done in the future? According to the panelists, the answer to this question is “yes”. They also stressed the role of cooperation between enterprises and universities as the source of innovative solutions. When it comes to the implementation of innovations, the panelists advised against deliberations with the management, which take a lot of time, and preferred the establishment of separate budgets and special purpose vehicles to deal with the implementation of specific changes. There are also companies that have to be innovative because of the very specifics of their industry. In summary, regardless of whether innovations are inside the company or are implemented slightly on the side, they are an inherent feature of all industries.

The second Special Guest of the conference was Steve Wells – Futurist and COO of Fast Future. The speaker outlined the list of technological challenges and the associated consequences for the next 30 years. When it comes to consumption and production, Circular Economy will be key. This is related to the fact that by 2030 the global consumption of energy will increase by 50%, of water by 40%, and of food by 35%. According to the guest, without taking any action, it will be very difficult to protect the deposits of natural resources and biodiversity on Earth. The futurist is convinced that artificial intelligence will not take over the majority of tasks performed by humans for the next 20 years. He also emphasized that the growth of the world’s population is currently one of the greatest challenges for humanity. It is estimated that by 2030 as many as 5 billion people will live in cities, while by 2050 it will be up to 72% of the global population. These numbers pose huge challenges which we are trying to overcome. An example of this is the construction of a 57-story building by a Chinese company in just 19 days. But there are also challenges that we still do not know how to deal with, such as: increasing unemployment associated with robotization or management of hybrid companies (in which robots take on the role of employees).

The future of money and the financial industry were the main topics of the third discussion panel, moderated by prof. Jerzy Witold Pietrewicz – Head of the Department of Market Analysis, Collegium of Business Administration, Warsaw School of Economics; Jan Krzysztof Bielecki – Chairman of the Council of Partners, EY Poland; Sławomir Grzelczak – Vice President of the Management Board, Biuro Informacji Kredytowej SA; prof. Witold Orłowski – Rector of the Vistula Academy of Finance and Business; Krzysztof Pietraszkiewicz – President of the Polish Bank Association; Dr hab. Roman Szwed – President of the Management Board, Atende SA, and the previous speaker, Steve Wells.

At the beginning the panelists pointed to the fact that the disappearance of physical currency can be caused not only by the development of virtual money, but also by automation. When a factory becomes fully automatic and no longer requires human labor, nobody needs to be paid. According to the panelists, the adjustment of the tax system to the changes taking place on the labor market will also pose a great challenge. The progressing automation prompts people to change their trade and set up their own businesses, based primarily online. It will, therefore, be important to adjust taxation in such a way as to maintain the balance from before these changes. Over time physical money will disappear and people will start using the so-called cryptocurrencies or money issued by central banks. But this will not happen in the near future, because in Poland, despite issuing 40 million payment cards and increasing the number of places where they can be used, cash is still used on an increasingly larger scale. It is also important to implement legal regulations conducive to the development of modern forms of payment. One of them is the regulatory sandbox, in which fintechs can enter the traditional economy to experiment without having to obtain licenses. Another option is the so-called stable coin, or stable bitcoin, which central banks are currently working on.

After the end of the content-oriented part, it was time for the evening gala. Its highlight was the awards ceremony honoring the best companies, outstanding managers, and business leaders who implement the highest standards of leadership. The gala was officially opened by prof. Michał Kleiber, Chairman of the Jury, and Beata Radomska, CEO of Executive Club, who emphasized the importance of developing innovations, as they are the key to success in business. This year 9 awards were granted in 8 categories!

CEO OF THE YEAR

Piotr Śliwicki – President of the Management Board of ERGO Hestia SA

Jerzy Starak – Chairman of the Supervisory Board of Polpharma SA (winner)

SPECIAL AWARD: PERSONALITY OF THE DECADE